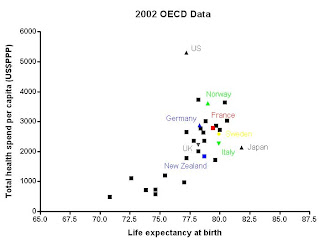 Prompted by Michael Moore's 'Sicko' there's been some debate recently about the high costs of US healthcare compared to the rest of the world, most notably the more socialised healthcare of Europe, and what this means. Many people (most obviously rightwing Americans) think this reflects the magnificent standard of US healthcare compared to European health rationing, others are not so sure, and I'm one of them. I just dug this graph out which shows a comparison of healthcare expenditure (public and private) per capita, against the ultimate hard endpoint - life expectancy at birth - in OECD countries (OECD 2007 Health Data). The data is from 2002 which is the most recent complete year (other years unsurprisingly look pretty similar). Now I know that purchasing power parity is a rubbish measure, and that there will be historical health effects unrelated to present healthcare funding rates, that US data is skewed by poor health outcomes in the uninsured or poorly insured, and that there are (small) genetic and (large) cultural/lifestyle differences making cross national comparisons somewhat dubious. So don't over interpret the graph, but just look at that trend, and see what you think about US exceptionalism.
Posted by pj at 16:55