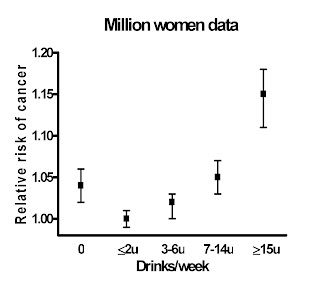 Some data from the Million Women Study (of women aged over 50) has caused some headlines today:

A glass of wine each evening is enough to increase your risk of developing cancer, women are being warned.
Consuming just one drink a day causes an extra 7,000 cancer cases - mostly breast cancer - in UK women each year, Cancer Research UK scientists say.

These reports are based on this study and press release. I've graphed some of their data (top right, 95% floated** CI). I think it is clear that the difference between a drink a day and less than 2 drinks a week (this was the reference group because non-drinkers often includes ex-alcoholics or those who have given up because they are already sick) is less than convincing (obviously it is difficult to interpret given that both the upper end of the 3-6u group and the lower end of the 7-14u group cover around 1u/day). 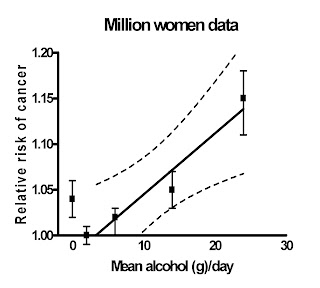 The claim that "each additional drink regularly consumed per day may account for approximately 15 excess cancers per 1000 women up to age 75" is actually based on a regression on the average amount of alcohol consumed in each category* - this data is represented in the middle right graph (as above but with mean alcohol, a regression line, excluding non-drinkers, and 95% CI). We can see that average consumption in neither group is conveniently near an average consumption of 1 drink (10g)/day.
It is clear that the regression is strongly driven by the heaviest alcohol consuming group, with a shallower regression being indicated if you exclude these subjects, and this highlights the limits of doing a regression analysis and then reporting the increased risks per unit of alcohol, since any non-linearity can make the linear regression coefficients misleading (such that while the regression line may describe a Y% risk for every X units, the data may still not support a statistically significant Y% increase for the first X units drunk).
It is always worth being circumspect when dealing with epidemiological data that produces very small risks, because we cannot know that every confounding variable has been accounted for in what is simply an observational study. Look at the zero alcohol consumption group (this would not actually be zero since 7% of these were actually drinking alcohol by the 3-year followup, but they don't provide the mean data), looks like there is something different between these individuals and those with minimal alcohol consumption - but this is not captured in the data (the relative risks have already been adjusted for available confounding variables).
I'm not sure why my estimates of additional risk per 10g/day are so much less than the study (obviously my regression is Mickey Mouse but it fits nicely, and it doesn't seem to be due to me not using log-linear regression either) - I get less than 1.05 relative risk (as you can see from the graph), their estimate of 15 additional deaths per 1000 women is around a 1.13 relative risk, although it appears that they are only include those cancers with an increased risk from alcohol associated with them, i.e. they don't include the lives saved by alcohol preventing lymphoma, thyroid, and kidney cancer!
If we look at the figures they report in the study, they say that there is an incidence of 118 cases of cancers that alcohol increases the risk for (oropharynx, oesophagus, larynx, rectum, liver, breast) per 1000 women up to age 75 years, and by drinking 10u/day this risk is up to 133 per 1000 women (which is where I got the 1.13 relative risk from)***. Since these cancers made up around half of those in this study we could estimate that the overall cancer risk for women up to 75 years is 236 per 1000, applying our approximate overall increase in cancer risk of 1.05 we get an extra 12 cancers per 1000 women, or an increase in absolute risk of cancer of 1.2% - that is, drinking 10u/day means that the chances of you getting cancer before you are 75, which is 24% anyway, goes up by another 1.2%. 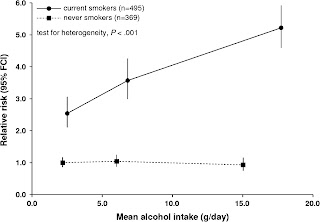 Interestingly the data suggest that the increased risk in cancers of the upper aerodigestive tract (larynx, oropharynx, oesophagus), which are some of the cancers increased in incidence with alcohol consumption in this study (the others being liver, rectum and breast cancer), is due to a synergistic effect with smoking tobacco (see their figure 4 - bottom right) - and this may mean the study overstimates the risk of alcohol - or rather, it fails to highlight that some of the apparent additional risk of alcohol only applies if you also smoke (it would be possible to control for this using covariates if smokers and non-smokers were modelled seperately).

* A unit is 8g alcohol, nowadays many wines and beers a sufficiently strong that they contain 10g per serving (small glass, half a pint) and this study uses 'a drink' to mean 10g alcohol.

** These confidence intervals are based on a 'floating absolute risk' model which is controversial and results in narrower CIs than conventional techniques.

***This is dodgy, to multiply the 118 cases of cancer by the estimated relative risk at 10u/day of 1.13 (which is what they seem to be doing) would only be valid if the 118 cases was from women in the lowest risk group - those drinking <= 2u/week - but we know that many women do drink more than this (nearly half in this study), and the overall cancer rate therefore already includes this extra alcohol related risk. However, if I adjust my above figures to account for this it doesn't make much difference - giving an additional 11 cancer per 1000 women, and thus absolute increased risk of 1.1%.

Excellent post. The scaremongering on the radio and in the press over this story must have worried a lot of people. Thanks for making sense of their poor stats!

hang on - we don't know the stats are poor. Just that there may be a little more to it than thus far reported.

It's not like this paper is another Kirsch 2008, where the stats really were ridiculous...

If you look at my middle figure it suggests that the regression may be just significant at 10g/day - i.e. a drink a day - but the associated increase in relative risk of any cancer is 5% - so the study may well be correct that the evidence is that an extra drink a day is associated with an increased risk of cancer - but that increased risk is very small, and we can't necessarily imply causality.

I don't think the stats are necessarily poor (although I do wonder why they seem to have run a regression line on the mean group alcohol consumption rather than using the individual level data), but rather that the study has been poorly reported by the authors. In this case I'm not convinced that the press have made up much that wasn't in the original piece.

Thanks for this - v interesting.

Thank you, fantastic post
This is exactly what I need to convince my poor MIL who was ready to give up alcohol completely.
Poor thing only drinks one glass of wine a day at most.

At least she asked first, as she's heard me and my SIL rant on shoddy interpretation in the media of statistics. My SIL has a degree in statistics and I have worked in scientific research.
On the basis of this and our interpretation of what we found in the media, she continues to enjoy life.

Unfortunately, the link you provided to the paper only works for University of Oxford insiders. Can you give us the actual title of the paper, and some hint as to where it is published? Or better yet, an address that works for the rest of us?

great stuff as ever. david spiegelhalter was singing your praises at dinner this evening, pointed out that while everyone was saying "oh wow a million people this must be a great study", in reality, if you need a million people to detect an effect, then it might be because the effect is pretty marginal...