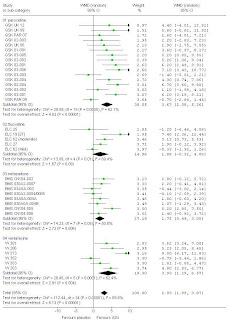 Rather than writing the systematic review I'm supposed to be doing, following on from a suggestion made by Cyril Hoschl regarding the PLoS study, here's another back-of-the-envelope forest plot, this time using the final Hamilton depression score and calculating the weighted mean difference (again the data is not 100% correct since I have estimated SD from the standardised change difference and the final and baseline scores, so it is the pooled SD between baseline and final scores and likely an underestimate).

Many people would argue that it is better to focus on final scores than change scores in RCTs, and certainly this way we are keeping all results in units of Hamilton depression score.

So what does it show? Well dear reader, it is quite interesting, overall the effect size is 2.93 (95% CI 1.99-3.87) but if we look at paroxetine and venlafaxine weighted mean differences in HRSD scores are 3.67 and 3.93 points respectively - both above NICE's criteria of:

Make of that what you will.

UPDATE
Ok, as I point out above my estimates of SD in this analysis are a bit dodgy so how can I sense check the above results? Well there's a rather obvious way, repeating the analysis below using the raw Hamilton change scores rather than the standardised mean difference (UPDATE2 a more accurate version of this analysis is presented here).

When you read a study and find that the authors have used an unusual method of analysis you always have to ask yourself why. Often it is just because they are particularly weird, or particularly clever. But sometimes it is because this method gets them the results they were looking for, and the more obvious 'normal' way of doing things doesn't. In this study they didn't just use the standardised mean difference to carry out their analysis, they actually calculated the change between drugs and placebo by subtracting the standardised mean difference of the improvement in one group from the SMD of the improvement in the other group - I'm not sure that's a very meaningful measure of improvement, they've actually normalised the improvement within each group then calculated the difference between these scores which have been standardised to two different groups - usually you would look at the SMD of the change in raw scores between the two groups (i.e. you subtract the mean improvement in HRSD in placebo from the mean improvement in the drug group and then standardise by dividing by the pooled standard deviation derived from the SD of the mean improvement in each group). 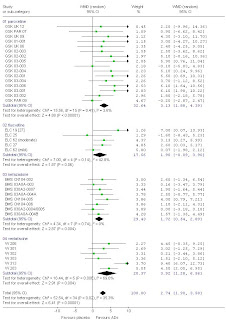 "Confirming earlier analyses [2], but with a substantially larger number of clinical trials, weighted mean improvement was 9.60 points on the HRSD in the drug groups and 7.80 in the placebo groups, yielding a mean drug–placebo difference of 1.80 on HRSD improvement scores."

When I reanalysed the data I extracted from the paper, this time using the mean difference expressed in raw Hamilton depression scores, I found something curious (see the forest plot reproduced to the right).

I made the overall effect size 2.74 (95% CI 1.90-3.58) which is a fair bit higher than the 1.80 the study authors report, and more importantly I found that the effect sizes for paroxetine and venlafaxine were 3.13 and 3.92 Hamilton depression score points respectively. These are both above that oh so important NICE 'clinical efficacy' threshold.

So my conclusion is that I don't trust this study, and I certainly don't trust their conclusions. I'm not sure exactly why my analyses are so different from the authors' but I'm fairly sure it has something to do with their over reliance on the standardised mean difference as a measure of effect size.


* The decision is more complicated than that, the Cochrane handbook says:

Thanks for this re-analysis. Looking at the study, I too thought it seemed a bit dodgy, and I appreciate your work and honesty.

Great work. Are you able to repeat analysis with just those in 'mild' 'moderate' and 'severe' HDRS categories. It would be interesting to see if effect sizes increased further.

I'm not at home at the moment so I don't have access to the data/software but the current analyses are all on trials with severe depression on the HDRS except for the fluoxetine trial 'ELC 62 (mild)' which won't make much difference to the overall analysis if it is removed (see here) but might make a difference to the flouxetine specific analysis.

Redid above comment with the correct data, unsurprisingly it didn't massively change:

Sam - forgot about your request - now done. Repeating this analysis. If we use the NICE/APA criteria but shift the labels (as suggested at the bottom of this post) then we have HRSD scores of 'mild' <19, 'moderate' <23, 'severe' >=23.

As above, rewrote comment using corrected data (there was a small error in the analysis when I wrote that comment originally so I've corrected the figures):

So these categorical severity analyses are in broad agreement with the regression.

Can't be bothered to use the new SD measures to recalculate these - they'll be much the same, and Robert finds the same sort of thing.